An exclusive new survey of the top 200 UK law firms shows that leading firms are moving away from merging as a favoured growth strategy because of the perceived financial, reputational and cultural risks associated with failed mergers. Instead, law firms see investing in new technology and team moves as having the best prospects of boosting their profitability.

From Recruitment to Robots: growth strategies for law firms is released today by leading partnership firm, Fox Williams LLP and specialist communications advisers to the legal profession, Byfield Consultancy. The research for the report shows that just 26% of respondents are looking to merge in the next two years. This reflects a significant change from the 2015 report ‘The Dating Game’, which showed 96% of respondents in the top 200 UK law firms forecasted substantial consolidation in the UK legal market in the next two years. These findings mirror activity in the sector this year, with a large number of reported merger talks failing to produce a merger.

This latest research shows that law firms are now taking a different tack. 83% chose increased investment in technology as having the best prospect of increasing a firm’s profits, followed by recruiting a team (71%). Conversely 86% of respondents identified merging as having the greatest risk of reducing profitability when compared with other growth strategies.

Interestingly, the survey ranked opening overseas offices as being the least popular means of increasing a firm’s profitability, with only 8% of respondents agreeing that increasing their international footprint had the best chances of increasing profits.  Although recent media reports featuring top 20 firms opening high-profile offices all over the world has created an impression that international expansion is a dominant part of UK legal growth strategy, our research shows firms are well aware that realising profits from overseas offices can be very challenging.

Risks to reputation are also front of mind for law firms considering different growth strategies.   63% of managing partners surveyed felt that a failed merger had the highest risk of damaging their firm’s reputation, way ahead of a failed investment in IT or an unsuccessful team move which ranked second and third.

“Our new research confirms that law firms are looking beyond mergers to realise their ambitions, which reflects the difficulty firms often have in finding a suitable merger partner. Of the alternative growth strategies, investment in technology is seen to have both the greatest potential to increase law firm profitability, but is also regarded as the biggest threat to the profession as we currently know it.”

Other key findings include:

Despite only a quarter of respondents looking to merge in the next two years, respondents who had merged provided positive feedback of their experience:

“Whatever growth strategy a law firm undertakes, it carries some risk to their reputation. And with the legal press, and others, closely scrutinising law firm growth initiatives, law firm leaders increasingly need to be aware of how much reputational risk - as well as financial - each strategy carries. Swimming too far into uncharted waters might be seen as a reputational risk too far, but clearly this report and the interviews we carried out for it show that simply treading water is no longer an option. "

Notes on the research 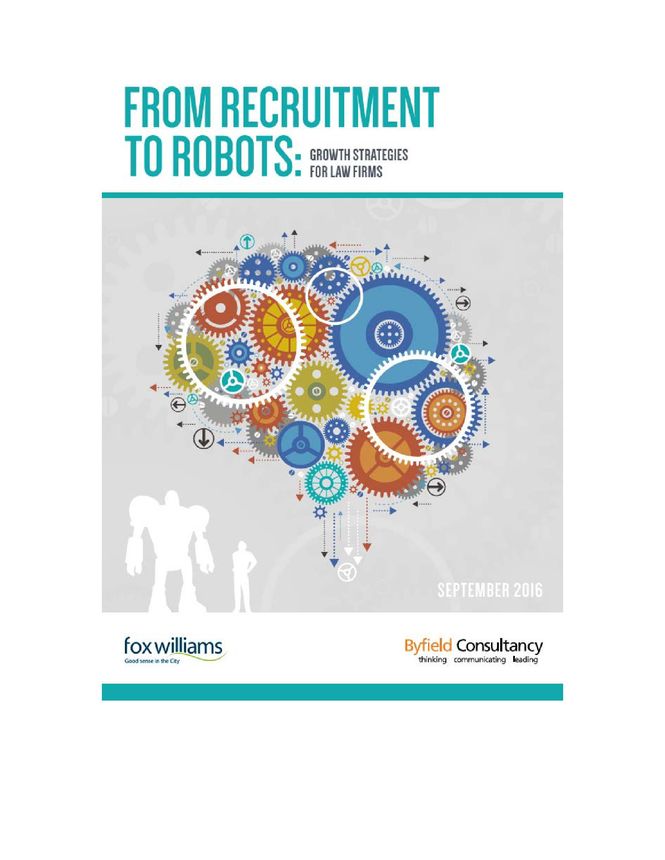 New path to qualification as a solicitor
Byfield Consultancy

Access to EU skills as vital as trade
Byfield Consultancy